It’s not only the old houses, structures or roofs that get affected. Even new houses can spring some roof leaks because there are so many probable causes for a leaky roof.

Roof leaks are also not to be taken lightly. It can lead to heavy damage, leading not only to a roof repair but possibly a whole roof replacement. No one is actually ready for a leaky roof and it is important to have it checked early where a simple roof repair might solve the issue. Roof leaks can happen to any house or establishment, sometimes with some warning signs and sometimes out of nowhere.

However most of them can be repaired at the right time with the right and regular roof inspection and maintenance. If you think you have a roof leak and want a professional roofer to look at it, and possibly do a roof repair, call us. We are licensed and insured roof repair expects in Clearwater and the surrounding areas. Below is a list of 10 causes of roof leaks and problems.

Here’s a compilation of the top 10 causes of roof leaks today.

Just like everything else in life, roofs also need regular maintenance. In fact, poor or no maintenance is a primary cause for roof leaks. This is because it’s during an inspection that roofing experts detect problems in the bud.

Prevention is always better than cure. Instead of ending up with a major problem, performing a routine inspection and noticing any signs of roof leakage saves you lots of money and time.

Some people don’t have their roofs inspected thinking it’s an unnecessary expense. Unfortunately, it’s because of their negligence that they eventually end up spending much more paying for the consequent water damage. 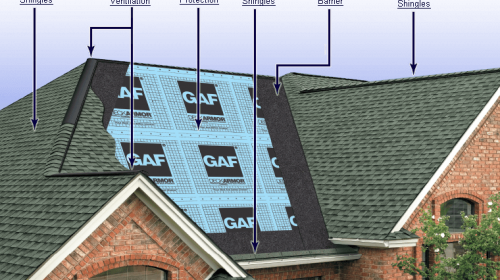 Inclement weather is another major trigger for roof leakage. For example, heavy rainfall can lead to overflowing gutters. The water thus accumulated ends up seeping into the roof deck and shingles over the gutter.

The seepage leads to structural damage in the joints between the wall and roof. If not addressed on time, the stored water ends up damaging the house’s structural integrity.

Hail is another major reason for dripping roofs. Remember, hail is nothing but frozen rain that is not only heavy but may also be as big as golf balls. So naturally, the roof takes a beating, and springs a leak because of fallen hailstones.

A lightning strike is dangerous to your home in two ways. First of all, it is powerful enough to start a fire. Secondly, while a lightning rod can prevent this, it cannot prevent the lightning strike from damaging your roof. Any form of roof damage leads to a dripping roof.

The wind is another factor of roof damage because of the debris it carries to your roof.  You never know what the wind carries and strikes your roof with, to leave you with a damaged and leaking roof. Besides, there is always the risk of high-speed winds ripping the roof apart.

Nothing much can be done about the unpredictable weather. It’s however possible to have the roof inspected after a bout of bad weather. It’s the best way to find out if any damage was inflicted, and prevent anything major from happening.

Houses have gutters installed for a reason, and not to improve its looks. They are meant to drain away all the excess water from the roof. The problem however is that it will not serve its purpose if it’s clogged by branches, mud, and other debris.

A clogged gutter system only leads to water pooling against the roof. The continual pressure of the accumulated water leads to water seeping through the walls and ceiling. This could have been prevented through regular inspection, and maintenance of the gutter system.

Sometimes bad weather can lead to slipped, broken, chipped or cracked tiles and slates. This is dangerous because it leaves the underlay exposed where rainwater accumulates and slowly leads to a leak.

Once again, this type of seepage could have been avoided through regular inspections and maintenance by professional roofers.

The underlay is designed to carry any water that seeps through tiles and roofing gaps away from the structure. However, sometimes overexposure can lead to the rotting of the underlay, and its consequent poor functioning.

This, in turn, springs a leak. Regular inspection is the best way to locate rotting underway, because the naked eye won’t see it. This in turn emphasizes the importance of regular inspection and maintenance.

Poorly installed roofs, and use of faulty materials, can also contribute to a seeping roof. This is the poorly installed roof by inexperienced roofers and DIY homemakers are easily blown off by heavy winds. They may also end up out of place, which compromises the integrity of your roof system, and possible seepage.

The roof valley is where two or more planes meet. As the structure is sloped, improper sealing and workmanship can lead to water leakage. Besides, even poor or irregular maintenance can lead to the accumulation of debris in the valley.

This, in turn, leads to the accumulation of water and consequent leaks. The accumulated water may be visible from the ground. However most of the time it’s only a professional roofer who notices it after a professional inspection.

7. Lack of or improper room ventilation

Don’t be surprised if your roof leaks, despite it not being the rainy season. This type of seepage is not due to rainwater, but is due to improper or lack of room ventilation.

If you wonder how it’s because poor ventilation leads to the accumulation of moisture. The excessive moisture created can with time end up deteriorating the entire roofing system.

This especially occurs in rooms where there’s lots of moisture generated like bathrooms and kitchens. Proper room ventilation is the best way to let moist air escape, and solve the problem, which roofers can provide.

If you wonder why, it’s because the rainwater that hits the roof ends up moving to the lean-to extension. This increases the pressure on the extension, which cannot withstand over a prolonged period of time.

The extension eventually ends up caving with pressure and triggering a leak. It’s also possible for the lean-to extensions to get old with age. This leads to a weaker and malfunctioned roof, and possible leakage.

Insufficient or inadequate insulation leads to warm and humid air rising from inside your home to the attic or loft space. This hot air meets the cold outer air, which leads to condensation on roof timbers.

The condensation may affect the entire roof, or only leave leaks in some places. This water leakage damages not only the roof but also your walls and ceiling.

Besides, poor insulation is the reason why snow quickly melts on the roof in winter. The melted snow then refreezes into ice because of the cold outside temperature.

The resulting ice dams lead to melted water backing up between roof shingles, and leaking into the ceilings and walls. All this would and can be prevented through a well-insulated attic.

There’s a high probability of leaks springing up in damaged roof junctions, flashing’s, and corners. All it takes is a slight gap in a poorly installed roof junction or corner to inflict possible roof damage.

Flashing is the structure you find under the shingle on roof joints. It comprises of thin metal pieces that work as a water-resistant barrier and are either exposed or hidden. They end up cracked when the sealant used for sealing corrodes with time. This is the tenth common cause for a leaking roof.

So you see, most of the common causes of roof leaks are a consequence of the homeowner’s negligence. Homeowners should maintain a schedule of having a professional inspection of their roofs conducted at least twice a year.

There are some people who feel that it’s not worth spending on a professional inspection and attempt to do it themselves. This is not advised because roofs can get slippery and lead to accidents to novices. Besides, you need a certain amount of skill and no fear of heights to work on roofs.

Professional roofers like Clearwater Roofing, know roofs like the back of their hand. They have the experience, and necessary tools and equipment to inspect a roof.

Their timely inspection and preventive measures can prevent water leakage and damage. This is the type of damage that may damage your home interiors and furniture if not taken care on time.

As they say, a stitch in time saves nine. Roof inspections do cost, but they also offer a cheap and easy means of locating early roof leak signs. By taking care of smaller leaks it’s possible to prevent bigger damage on the house structure and consequent massive repair bills.